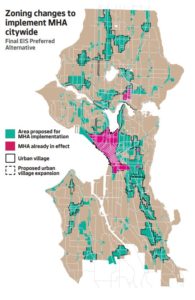 On Monday, the Seattle City Council approved Seattle zoning changes to 27 neighborhoods by a 9-0 vote. The plan, called Mandatory Housing Affordability (MHA), will allow taller and denser buildings in major Seattle neighborhoods in exchange for affordable housing units. Developers have the option to designate a certain number of units for low-income housing or contribute to a fund so the city can build them off-site. It will also allow additional housing to be built on a small portion–about 6%–of land currently zoned for single-family residences. It leaves most of Seattle’s single-family zoning untouched.

The City of Seattle estimates that 6,000 low-income units will be created over 10 years as a result of the new zoning and legislation. That includes zoning that was already implemented in 6 urban villages in 2017. These locations are noted in the pink areas in the map on the right. For an interactive map of all the final changes, see the City of Seattle’s MHA Zoning Map.

Where Did MHA Come From?

MHA is the result of a years-long process that began in 2014. Sensing Seattle’s influx of people and growing home prices, Seattle’s then-Mayor Ed Murray put together a panel of housing experts to come up with a plan. That resulted in the Housing Affordability and Livability Agenda (HALA). With a goal of creating 50,000 new homes over 10 years—20,000 of them “affordable,” HALA helped strengthen protections for renters, doubled funding for the Housing Levy, and expanded the places where affordable units could be built.

MHA was proposed as part of HALA in 2015. After two years of seeking community engagement and input, MHA upzones were applied to six neighborhoods in Seattle in 2017. That development is starting to come to fruition, along with the city applying the money it received to new projects.

A legal challenge was mounted against MHA, saying the City of Seattle didn’t take enough time to consider all the impacts during the environmental review process. After a judge ruled last November that MHA could move forward, few things changed about the plan overall, and the City Council began deliberating on city-wide implementation.

A previous voluntary plan Seattle has had in place since 2001 to incentivize developers to pay for affordable housing in exchange for building bigger generated $125 million and resulted in 3,646 units, some which are still under construction. However, that plan was largely criticized because of its voluntary nature.

Affordable housing goes by a general rule that housing cost no more than 30% of a household’s monthly income. For example, if you make $2,000 per month—about what someone at Seattle’s minimum wage would be making—you should not pay more than $600 on housing. That’s tough in a city where the average 1-bedroom apartment rents at around $1,900 per month.

Seattle City Councilmember Lorena González said, “For some this legislation goes too far. For some, it doesn’t go far enough.” When tackling issues such as these, it’s hard to make everyone happy. Some people worry that Seattle is becoming increasingly inequitable and pushing less affluent residents outside the city. And some have decided to leave altogether. On the other hand, long-time homeowners worry their neighborhoods will be gobbled up by towering apartment buildings and commercial space, forever changing the character.

Aside from the full support of the council and mayor, there are other supporters of the plan including pro-density environmentalists, non-profit housing providers, and local unions. Proponents of the plan hope it will help ease the squeeze of working-class families from the city’s core and help more people live in urban villages next to transit centers.

Opponents say its standards aren’t stringent enough for developers and worry that most will opt to just pay the fee and not build affordable housing in higher cost neighborhoods. Others say the plan will not actually help improve the housing shortage or affordability. And developers are not exactly doing backflips either, as the additional fees they’ll have to pay to the city drives the cost of projects up. Some critics even went as far as to say the city will eventually seek to eliminate single-family zoning altogether—an idea that councilmember Sally Bagshaw slammed as “untruthful”

Related Article: Pros and Cons of Upzoning in Seattle

It’s hard to state unequivocally what will happen for Seattle housing next. All these are valid concerns as the city grapples with how to accommodate the estimated 1.8 million more people who are expected to move to our region in the next 30 years.

Some ideas that have been thrown around are:

Disclaimer: Beachworks LLC is a local real estate investment and development company located in Seattle. We write about topics affecting our industry for informational purposes only. Some may be speculations based on topics being discussed in our region and are subject to be changed and be updated as time allows. 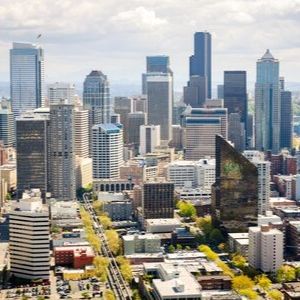 Article Name
Seattle Approves Zoning Changes to 27 Neighborhoods
Description
On Monday, the Seattle City Council approved Seattle zoning changes to 27 neighborhoods by a 9-0 vote. The plan, called Mandatory Housing Affordability (MHA), will allow taller and denser buildings throughout these neighborhoods in exchange for affordable units or payment into a housing affordability fund.