Affordable housing in Seattle is a hot topic on everyone’s minds. While the real estate market isn’t as hot as it was in 2017, it’s still bumping along. Washington’s economy was number one in the nation, according to a study by WalletHub. Our economy continues to create many jobs, attracting people from other cities. Legislation and development plans that have been in the works for years are coming into action this year, which could begin to ease the housing and homelessness crisis around the area. Take a look at some of those developments below.

Affordable housing communities are being built in South Seattle, Magnolia and Mill Creek. South Seattle’s Othello Square just began construction and will be a mixed use building with commercial space, a community center, and 68 permanent 1-to-3 bedroom homes for low income families.

In another development, Seattle Children’s Hospital will invest up to $8 million in a housing and clinic project called Orenda that will bring 72 more income-restricted units online.

In Mill Creek, a hearing examiner approved a site plan for a project known as “The Farm.” It will be comprised of 354 apartments aimed at lower and middle income families. The project includes 100,000 feet of commercial space as well as public plazas and connections to open space and trails nearby.

The City of Seattle is also throwing around the idea of exploring alternative uses for 500 acres of land currently used as golf courses.

Landlord-Tenant laws in Washington state underwent significant changes this year and go into effect in July 2019. The biggest changes were extending the notice for default in evictions from 3 to 14 days. This will give renters significantly more time to come up with money and apply for rental assistance.

The other major change was increasing the notice a landlord must give for a rent increase from 30 to 60 days. Previously, rental increase notice was 60 days only if the increase was more than 10%. The new laws also require landlords to give 120 days notice for building demolition in order to give renters more time to find a new place.

New laws giving renters more protections can help curb the slide into homelessness. Lack of affordable housing is a leading root cause of homelessness, and one eviction can lead to homelessness and trouble renting an apartment in the future.

For more information, visit Seattle.gov’s page on the Homelessness Crisis.

In Seattle, the City Council is set to move forward with legislation making it easier to permit and build ADUs. The idea behind the legislation is to allow homeowners to more easily build additional dwelling units on their property. This will help add additional and affordable housing while mitigating the razing of older homes.

Earlier this year, Washington governor Jay Inslee signed legislation that would allow cities and counties to use a portion of excise taxes collected on the sale of homes for affordable housing projects. Previously, real estate excise taxes were only allowed to be used for capital improvement projects.

The legislature also increased the state’s Housing Trust fund to $175 million from $106 million in 2018. The Housing Trust Fund awards money to fund affordable housing projects around the state.

Amazon and Microsoft made news earlier this year when the two companies announced they would invest millions of dollars in initiatives for housing and homelessness projects. A new fund was created by Plymouth Housing earlier this week that collected $48.8 million from various tech companies. Amazon also announced it’s donating a total of $8 million to Seattle (and $3 million of that to Arlington, VA – the host of its second headquarters) and an employee matching program. Seattle-based data visualization company Tableau also announced it would invest $1.3 million into 50 different cities to try to end veteran and chronic homelessness.

Tech companies have begun to voluntarily step up investing money to solve the affordable housing crisis. Many people see tech companies as part of the problem as they bring in highly paid workers who often displace people in neighborhoods around downtown tech areas and make real estate less affordable.

Although it will probably take many years to make major strides in affordable housing and curbing homelessness, the current projects underway and legislation will likely help mitigate some serious issues related to housing affordability and homelessness around the Seattle area. 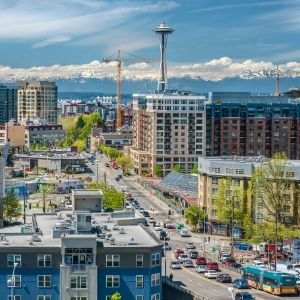 Article Name
What's Happening With Affordable Housing Around Seattle?
Description
In our growing city, affordable housing is a hot topic on everyone’s minds. While the real estate market isn’t as hot as it was in 2017, it’s still bumping along. Here are some developments happening around...
Author
Beachworks
Publisher Name
Beachworks LLC
Publisher Logo