When people think of earthquakes in North America, they often think of California. You may recall images of the collapsed bridge from the 1989 Loma Prieta earthquake in Northern California. The LA region is also prone to moderately frequent earthquakes from the various fault lines that run through the area.

While California gets all the earthquake attention, the Puget Sound has its fair share of risk. Recently, there were over 4,100 recorded mini earthquakes west of Seattle called “episodic tremor and slip.” Scientists say these events happen every “14 months or so”. These earthquakes are so small that people would barely feel them, but are a good reminder that big and small quakes can happen in Western Washington. 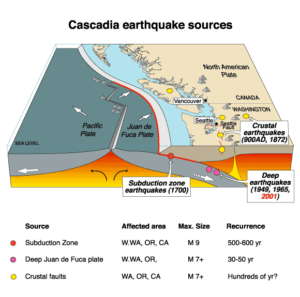 The city of Seattle is near a dangerous “megathrust” fault line called the Cascadia Subduction Zone. This fault line begins off the coast north of Vancouver Island and ends off the coast of Eureka, CA. Major cities that are near the subduction zone include Vancouver, Seattle, and Portland. This zone is not usually particularly active, and many hundreds of years can pass without any significant seismic activity. However, this fault can cause considerable ground shaking along the entire Pacific Northwest coast.

Given that there is a risk of a major earthquake, all Seattleites should have an earthquake preparedness kit. While nobody can predict when an earthquake will strike or how large the magnitude of the quake will be, everyone can stock up on disaster supplies. It only takes a few minutes to assemble, and the package can make your life significantly easier when an earthquake does hit. Many people don’t have a kit at home because they are unsure of what to put in it. Here are five things you need to prepare ahead for a quake.

Related Article: Protect Your Home From Natural Disasters in Washington

In the event of a major earthquake, one of the significant risks is that there may not be easy access to potable water. Water lines may break, power lines may be down, and other essential services may be affected. Access to food may also be challenging as stores may be damaged or run out. Always keep enough water and food for at least 72 hours in your preparedness kit.

Keep essentials such as band-aids, gauze, and ointment in your kit. You don’t need anything super fancy. If an earthquake does happen and you do get hurt, you should have resources to fix minor scrapes and scratches. Hospitals and other medical facilities will likely be overwhelmed during an earthquake so having these supplies is essential. You’ll also want to add any critical medications to your kit. For example, people with diabetes who take insulin would be well-advised to keep that medicine in their kit.

Keep all your documents in one place. Personal documents such as driver’s license and passports are essential to have. Medical records are critical. During a major earthquake, electricity and internet access may go down. Having a paper copy of your prescriptions hopefully lets you obtain more medication, if you need it. You might also want to include a paper map since cell phones may no longer work.

Keep a toothbrush, comb, toilet tissue, and other hygiene items in your preparedness kit. It may be a while before stores have these items for sale again, so they are useful to add.

If an earthquake somehow traps you, a whistle is essential to call for help. Rescuers searching for survivors can locate you faster if you have the means of alerting them where you are. On that note, it’s good to keep something similar next to your bed, in case an earthquake happens while you’re sleeping.

Take the Time Now to Be Prepared

It’s important to take the time to prepare before a massive quake strikes. While large magnitude quakes in the Puget Sound region are rare, they are not impossible. The recent flurry of small, undetectable quakes serves as a reminder that people living in this region need to create earthquake preparedness kits for their home, work, and vehicle.

In your kits, ensure that you have bottled water and food, essential hygiene items, first aid supplies and medications, vital documents, and a whistle.

While none of us can predict when or where the next the earthquake will strike, we can all protect ourselves by taking the time today to be a little more prepared. Also, always remember that if you do feel an earthquake, then drop, cover, and hold on! 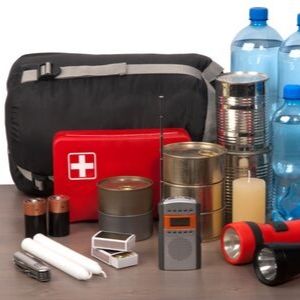 Article Name
Seattle Earthquake Preparedness: Five Things You Need For Your Preparedness Kit
Description
While the Puget Sound region is not the most dangerous area for earthquakes, it's still at risk. Recent rumblings under the surface are a reminder that it's never too early to put together a disaster preparedness kit.
Author
Beachworks
Publisher Name
Beachworks LLC
Publisher Logo